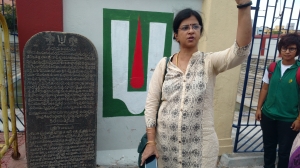 Didn’t realise west Mambalam had such colourful history. But then when you hear it from some one who has grown up in the area and passionate about history like friend Padmapriya Baskaran the history comes alive.
If T Nagar was crowded, to me West Mambalam was congested, barring a few stretches and it was with great difficulty that one negotiated ones way. So I never really bothered to look at it in a historical sense, though I was aware of the fact that Mambalam existed much before Thiyagaraya Nagar was born in the early 20th Century. So it was with curiosity that I registered for the ‘Walk through west Mambalam’ obeing conducted by Padmapriya Baskar, a blogger and heritage enthusiast and most importantly a neighbourhood girl, who had spent most of her life there with memories of Mambalam as a self contained and conservative neighbourhood.
Early in the morning of 19th August the walk through West Mamblam began at the Kothandaramar temple, which is located closer to the Madley subway. The Kothandaramar temple was built by Adi Narayana Dasa, a descendant of Gopanna popularly known as Bhaktha Ramadas, who was a revenue collector under the Golconda ruler Abul Hasan Tana Sha. A great devotee of Rama he is supposed to have used the state money collected for the construction of the temple at Bhadrachalam and hence was imprisoned for misusing of state funds. And as legend goes he was finally released when Lord Rama and Lakshmana appeared in the guise of traders and paid the due amount in gold to the Sultan. The Kothandaramar temple built on the model of the temple at Bhadrachalam, was later renovated by Vankayala Kuppaiah Chetty, a rich businessman, who apparently was being slow poisoned by his own relatives. Vankayala Kuppaiah Chetty stands with folded hands frozen as a sculpture right in front of the sanctum sanctorum. The street adjacent to the Kasi Viswanathar temple is also named after him, though the name has been truncated just to Kuppaiah. 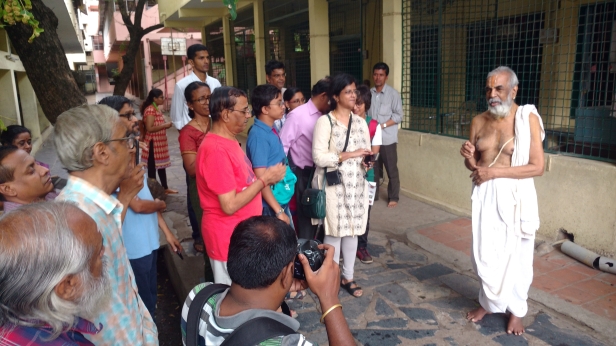 The next stop from the temple was the school run by the Ahobila Math, one of the three schools in Chennai city that follows the Oriental method of teaching. The Ahobila Math Oriental school was started in 1953. A co-education, the children still wear traditional attire to the school. Past the Agraharam where the tiled houses are giving way to multi storey buildings, we stopped at the Srinivasa Theater. Built in 1963 by Devanathan, right in the heart of city which is going the expensive multiplex way, the highest priced ticket at this theater even today is Rs 30/-.and lowest ticket is priced at Rs 7/- You get to see the latest releases too and all in DTS sound.
Moving alongside the Haridass madam also known as Bajanai mandapam, we reached our next halt, the Kasi Viswanathar temple.  Padmapriya said as water source was one of the main reasons for any army in those days to make its camp, it was around the long tank (that has now disappeared to emerge as T Nagar) that the Vijayanagara army had camped. The commander of the Vijayanagara army was keen on a pilgrimage to the holy temple of Viswanatha at Kasi (Varnasi), but as he could not make it to Kasi, he decided to build the temple right on the banks of the Long Tank and hence it is known as the Kasi Viswanathar temple. The temple believed to have been built about 400 years ago was in a very dilapidated condition and was renovated just a few years ago says Padmapriya.
A little further away from the temple stands the Thandu Thulukkanathamman Koil, which in itself seems to convey that it should have been a deity worshipped by the camping army as thandu means a camping ground for army says Priya.
The Gohshala adjoining the Kanchi Mutt was started about 30 years ago with 3 cows and today it has a little more than 100 cows says Priya. Every Friday devotees assemble for the Goh pooja which is telecast live. The milk from the Gohshala is distributed to schools nearby free of cost.
The last stop was of course the Public Health center, a medical facility started as a small thatched hut which has now emerged as a full fledged hospital with 150 beds and a cardiology section. We also passed by the deity Elliamman, which is one of the seven frontier deities of the erstwhile Mambalam village. The Telugu inscription nearby stands testimony to the village having been a Reddy Zamindari village.
During the course of the walk Padmapriya kept adding details about the some of the important landmarks within the West Mambalam area which we couldn’t cover like that of the Ari Gowda, a  Badaga leader with political affiliation to the  Justice party. He is supposed to have donated vast tracts of land he owned in the West Mambalam area when Justice party was trying to create new settlements. Hence the road has been named after him says Priya. Two of the subways that connect T Nagar to West Mambalam are named after men who self immolated themselves during the anti-Hindi agitation of 1965. Interestingly the Duraisamy subway as per Corporation records is actually known as Dheeran Sivalingam Subway pointed out Padmapriya. On the night of January 25, 1965 Sivalingam who was just 21 years old, and working with the Corporation of Madras committed self-immolation, protesting against the imposition of Hindi. As he lived at Viswanathapuram adjacent to the railway gate, which gave way to the subway in the late 1960’s, it has been named after him. Aranganathan who went to pay his last respects to Sivalingam apparently decided to follow him and committed self immolation on the morning of 26th January. Says Priya, in a matter of 24 hours 7 people took their lives protesting against the imposition of Hindi and this gave jitters to the ruling Congress dispensation.
Though the walk got over due to paucity of time clearly there were many more stories to tell and we realized we had covered only a small section of the West Mambalam. From temples, mutts, Ghosalas to protests against Hindi imposition, West Mambalam has many tales to tell. And Padmapriya brings them all alive with her passion. 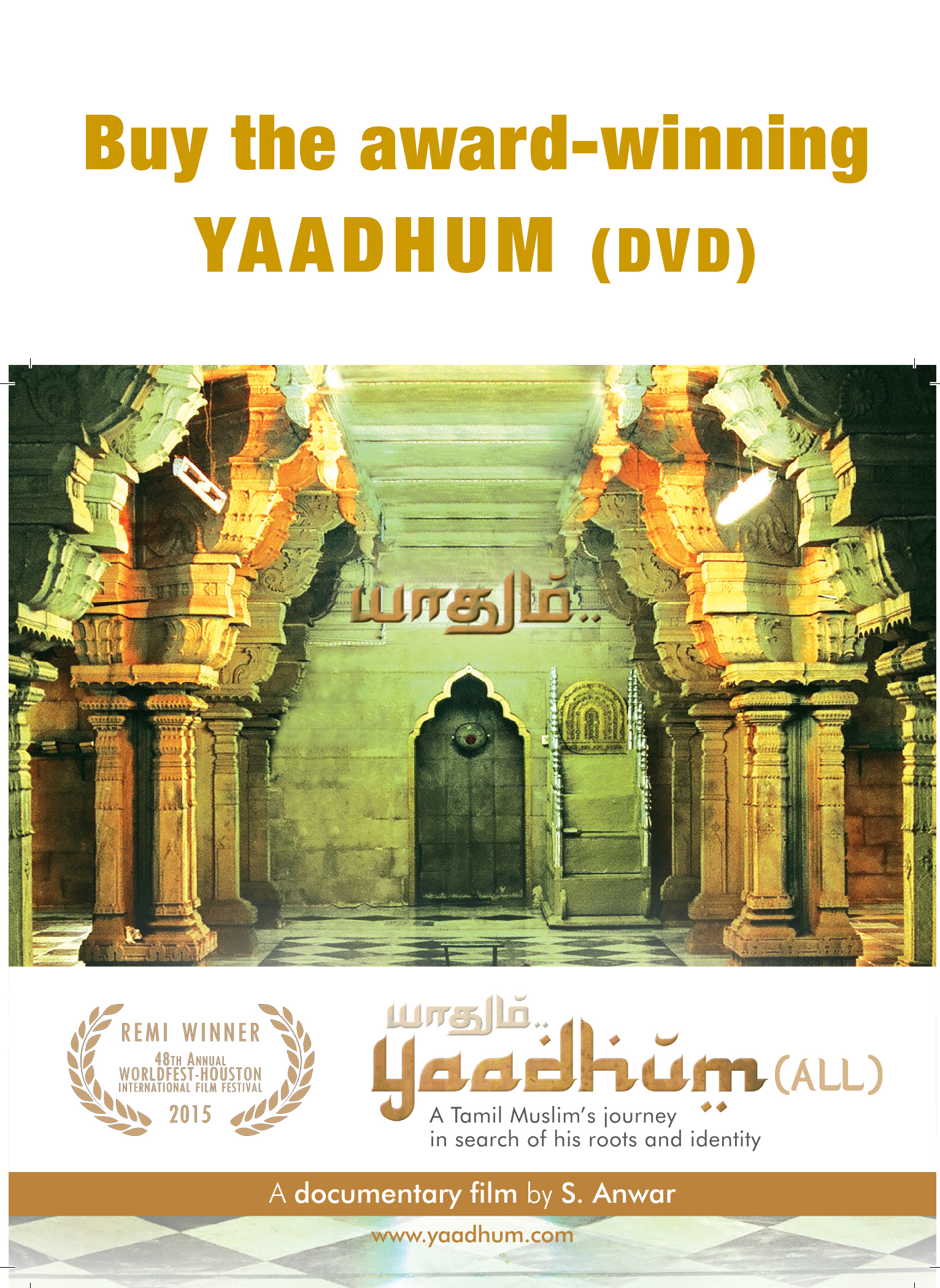 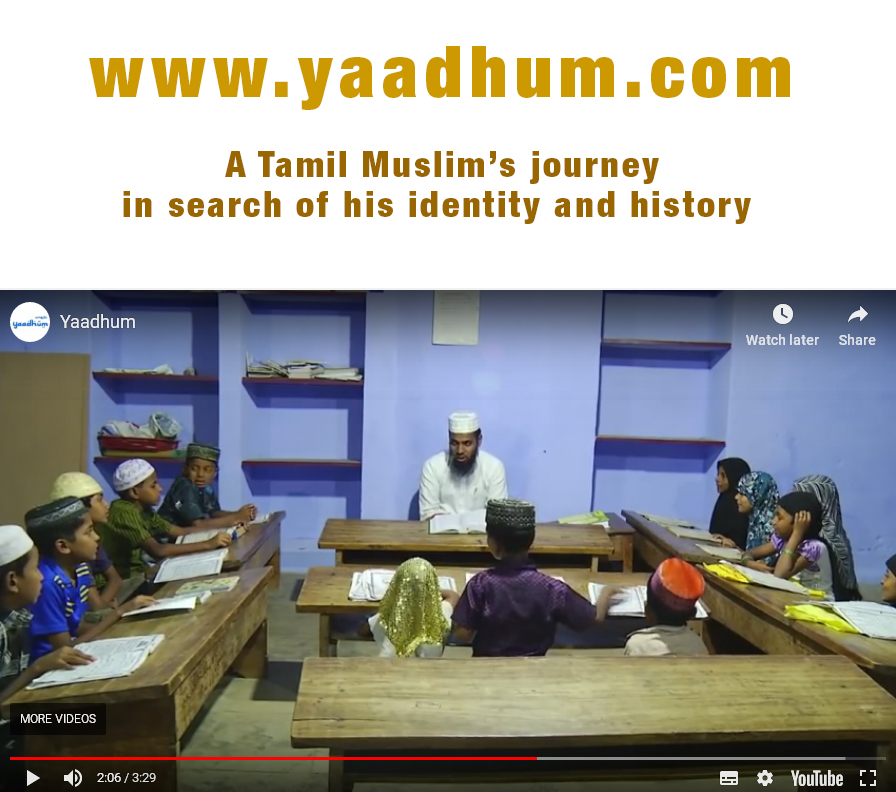