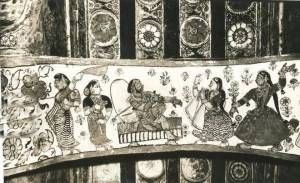 In 1674, based on an appeal by Rayasam Venkanna, a Minister in Thanjavur Nayak’s court, the Bijapur Sultan asked Ekoji (Venkoji), a commander in the Bijapur army and, more important, the half-brother of Sivaji, to intercede in the affairs of Thanjavur. It eventually resulted in the establishment of the Maratha rule in Thanjavur in 1676. The Marathas, who emerged from the collapse of the Deccani Sultanates and the Mughals, shared many cultural traits with them, including a love for music and dance. The Thanjavur Marathas, who inherited the court of the Telugu-speaking Nayaks, enriched the durbar with Marathi traditions and the courtly traits of the North.

The hall in front of the Subramanya shrine (inside the Big Temple at Thanjavur), has paintings of various Maratha rulers of Thanjavur and those associated with them. Little more than life-size portraits, and painted during the time of Sivaji II, the last ruler of Thanjavur, they nevertheless offer us a peek into the durbar of the time. Rubbing shoulders with Maratha royalty are soldiers and two dancing girls. One is a South Indian while the other is a Hindustani dancing girl or courtesan. The painting of the tawaif or courtesan is a reminder of a time when the sounds of tabla, harmonium, sitar and sarangi competed with the tinkle of the ghungroos(ankle bells) of the dancing girls in the royal durbars across Tamil Nadu.

V.S. Radhika, a research scholar, in her thesis titled, ‘Development of Sadir in the court of Raja Serfoji-II (1798-1832) of Tanjore,’ points to another painting in the possession of the Victoria and Albert museum that has been recorded by Dr. R. Nagaswamy. In the painting done during the time of Serfoji II, “… canvas shows three Hindustani dancers in action. The dress worn by them is almost akin to the costume of North Indian Kathak dancers with ghagra… Both, from the point of view of the costume and the musical instruments, it is apparent, that the dance is of North Indian origin” (as paraphrased from the thesis).

Radhika also lists several Modi documents (Marathi written in the Modi script) in the possession of the Sarasvati Mahal Library in Thanjavur, which throw light on the Maratha court. One of the Modi documents is a contract with six Hindustani dance teachers in the natakasala, namely (1) Bilaval Ali (2) Mirzabaker Ali (3) Allauddin (4) Hussain Khan (5) Govinda Raj Ramji Bove and (6) Govinda Rao Bove. These teachers, we understand, taught Dhrupad, Khayal and Tappa (Hindustani musical forms) to the Rajadasis or the dancing girls in the court. The documents also reveal that the Thanjavur court attracted musicians such as Kalyan Singh, Dirdar Ali and Lakha Ram from faraway places like Gwalior.

No wonder that it was at the Thanjavur Maratha court that the twain met, meaning the intermingling of Southern and Hindustani dance and music. (Interestingly, the Maratha court evinced equal interest in Western music and dance too). It was in this court of Serfoji II and his son Sivaji II that the four brothers — Chinnaiah, Ponnaiah, Sivanandam and Vadivelu — popularly known as the Thanjavur Quartet, and credited with laying the foundation of dance, which later took the form of Bharatanatyam, were employed. A letter written in Modi script by Sivanandam reveals that they were well-versed in Hindustani tradition too. During the reign of Sivaji II, when the palace officials denied them audience with the king, Sivanandam nattuvanar chose to represent their grievances in a letter to the King, whom they addressed as Huzoor. Sivanandam wrote, “as directed, we were teaching the Dasis of the town both Hindustani and Karnataka dance (Bharatha Natyam).”

Even as Thanjavur was once again emerging as a thriving cultural capital under the Marathas, enabling the synthesis of different music and dance traditions, the emergence of the Nawabs of Arcot in Tamil Nadu by the early 18th century meant that the Hindustani tradition found patronage at Arcot and later at Madras where Nawab Walajah moved his durbar in the 1760s (For more details on this,refer to the earlier article published in the Hindu Friday Review, dated January 5, 2018)

Either the rise of the Arcot Nawabs or the stormy relationship the Ramnad Sethupatis had with the Thanjavur Marathas, Hindustani music and dance tradition found its way into the Marava court of the Sethupathis. Dancer and research scholar Swarnamalya points out that during her research, she found a painting “on the ceiling of Ramalingavilas palace at Ramanathapuram where the Sethupathi is seated on his throne, flanked by women in saris. The dancer, however, is in a Hindustani costume, with her hands in the jakkini position and behind her the musician/dance master sports a sherwani of sorts, clearly distinguished in clothing from their South Indian audience.”

Dr Raja Mohamed reports of the presence of Hindustani musicians Nannu Meah and Chottu Meah, who played dholak and Svaragath respectively in the court of the Pudukottai Samasthanam during the reign of Raja Ramachandra Thondaiman in the 19th century. Perhaps an in depth study might help us understand how far and wide this tradition existed in Tamil Nadu and what its influence was. 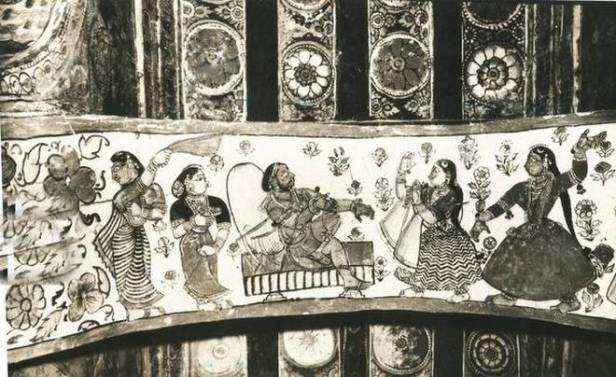